Amazing facts about lions in uganda Our love for Africa is embodied in our name and mascot. For us nothing, captures the essence of Africa more so than the symbol of the lion. To celebrate World Lion Day 2021, we wanted to examine 10 interesting facts about lions. Read on for more amazing lion facts!

Of all the big cat species in the world, lions are the most social. They live together in large groups known as “prides”. The size of a pride can range in size from 15 to 40 members. These prides include multiple adult males, a dozen or more related females and the pride’s cubs. In general, the more members a pride has, the stronger it is relative to rival prides. The pride’s females also prefer to have more males in the pride as this helps to ensure the survival of their cubs.

2) FEMALE LIONS DO MOST OF THE HUNTING, WHILE MALES ARE RESPONSIBLE FOR PROTECTING THE PRIDE

Male lions may get all of the attention with their majestic manes, but the females do the majority of the work when it comes to hunting. Anywhere from 85-90% of the hunting is done by the females in a given pride. The males, meanwhile, protect both the pride and the pride’s territory (which can extend up to 100 square miles) from rival prides and other predators. Even though females do the vast majority of the hunting, male lions usually get to eat first! 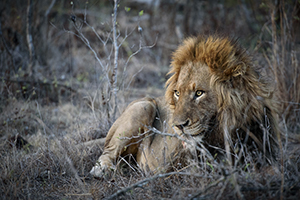 3) LIONS DO NOT NEED TO DRINK EVERYDAY, BUT THEY DO NEED TO EAT

Lions can go up to four days without drinking water, but they need to eat everyday. Adult female lions need to eat about 11 pounds of meat each day, while adult males eat 16 pounds or more every day. And while lions primarily prey on large herbivores such as zebra, wildebeest and buffalo, they have been known to prey on smaller animals as well.

A lion has many physical characteristics that make it a superb hunter. The vision of a lion, for example, is roughly six times more sensitive to light than a human’s. This gives lions a distinct advantage when hunting at night. A lion’s claws are retractable, allowing for the excellent control when it needs to go in for a kill.

Did we mention that those claws are large? When fully extended, a lion’s claws can be up to 1 1/2 inches in length. Lions can also reach speeds of up to 50 miles per hour in short bursts and jump up to 36 feet in length. Taken together, it’s easy to see why the lion is referred to as the “king of the jungle”, which leads us to our next fact… 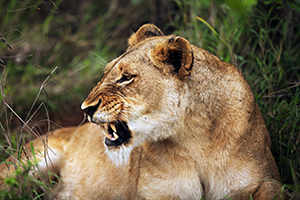 5) LIONS DO NOT LIVE IN JUNGLES

Known colloquially as the “king of the jungle”, lions do not actually live in jungles. Instead, their primary habitats consist of Africa’s grasslands and plains.

6) LIONS COMMUNICATE IN MANY WAYS

A lion’s roar can be heard up to 5 miles away. The roar is a warning to other animals and rival prides to stay clear of the lion’s domain. But beyond the iconic roar, lions communicate with one another as many cats do: through mews and purrs.

Lions also rub their heads on one another as an act of bonding and to spread the “family scent”. This scent allows the lions of a specific pride to know who is a member of their family and who is not if a dispute arises between prides.

Lions mate every two years and female lions give birth to a litter of 2-3 cubs after a four-month pregnancy. Females in the same pride tend to give birth around the same time, which allows multiple litters to be raised together.

This has the added advantage of allowing different cubs to nurse with other lion mothers, making it easier for the pride to manage the cubs in those crucial early months. Where’s dad during the raising of the cubs? Alas, male lions do not directly participate in the parenting, but they will protect the pride’s cubs from danger. 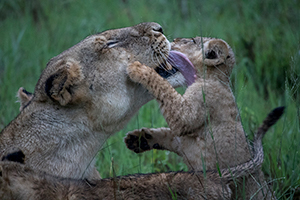 8) LION CUBS HAVE TWO OTHER NAMES

Though they are usually referred to as “cubs”, lion babies have two other names: “whelps” and “lionets”.

9) LIONS ARE THE SECOND LARGEST CAT ON EARTH

10) LIONS ARE UNDER THREAT

Only 20,000 wild lions remain in Africa, which is half of what it was only 30 years ago. Some scientists predict that wild lions could face extinction by the year 2050 if trends continue and humans don’t increase their efforts to protect these amazing and powerful animals.

The main threats to lions are loss of territory, lion/human conflict, and trophy hunting. As a traveler, you can do your part by traveling to national parks and game reserves that put resources toward protecting Africa’s lions.

By booking with Lion World Travel, you can be sure that you are helping to support lion conservation in Africa.

For our premade safaris. Check through One thought on “Amazing facts about lions in uganda”