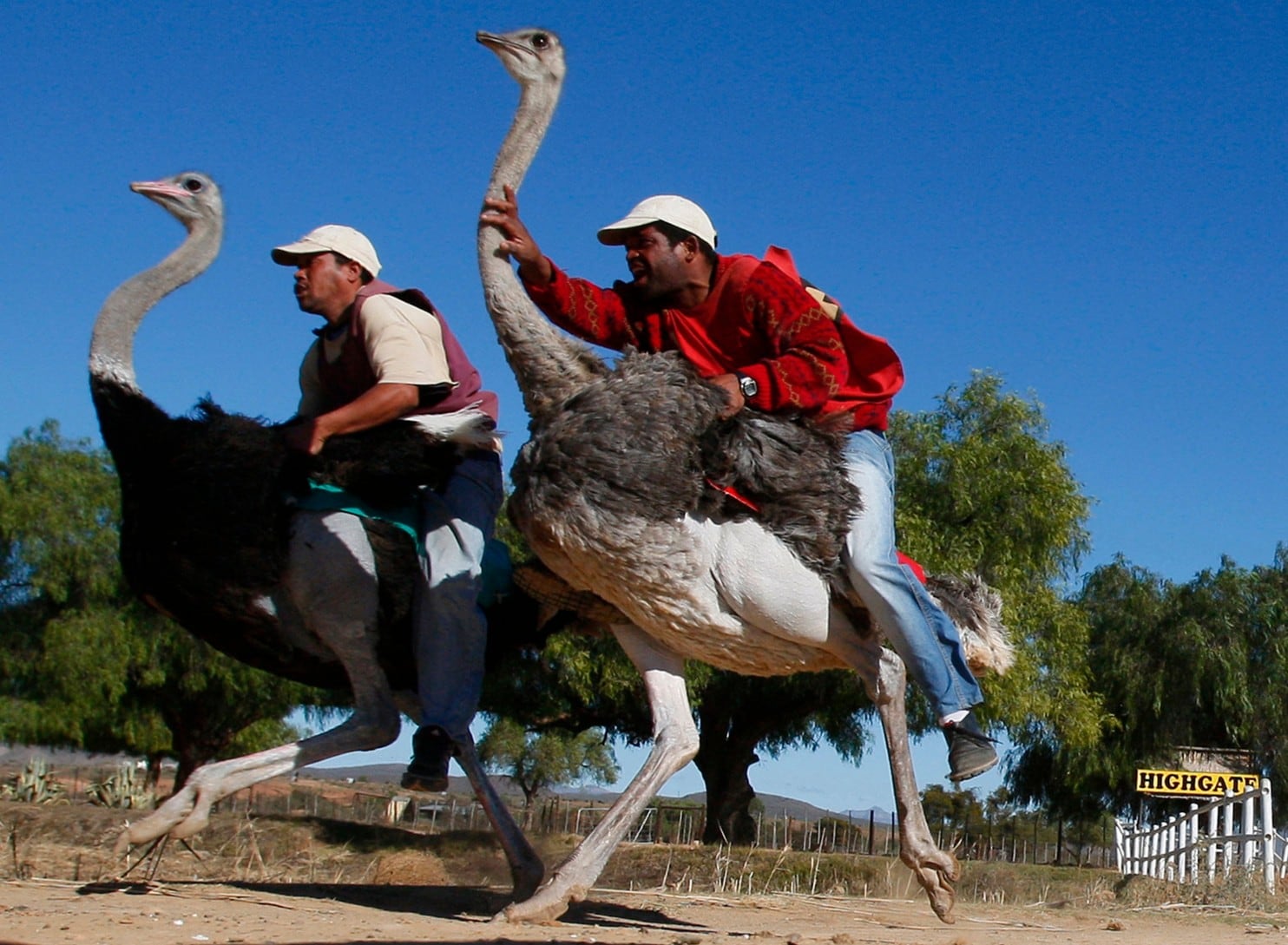 They are native to Africa and lay the largest eggs of any living land animal. With the ability to run at 70 km/h (43.5 mph), they are the fastest birds on land.

Found across Africa’s hot savannahs and open woodland, the ostrich is the world’s largest bird. It stands up to a massive 2.7m tall and weighs as much as 159kg – that’s around 1m taller than the average man, and the weight of two men combined!

This flightless bird has a long, bare neck, long, sturdy legs and a bulky body covered with feathers. Males and females have different coloured feathers – males sport black plumage with a white tail, and females are mostly brown. Both sexes have small heads, a short, wide beak and big brown eyes protected by long dark lashes.

The ostrich might not be able to fly, but boy can it run! Using its long legs, powerful thighs and strong feet, this big bird can cover five metres in a single stride and reach speeds of over 70km per hour! When zooming along at such mega speeds, it holds out its short wings to help it balance.

This brilliant bird’s strong legs don’t only carry the ostrich where it wants to go – they’re super effective when it comes to self-defence. If an ostrich is cornered by a hungry predator, such as a lion, cheetah, leopard,  or hyena, it will kick with a force powerful enough to kill! And check this out, each two-toed foot is armed with a ten centimetre sharp claw, too, so predators had better beware!

With their tall height and excellent eyesight, these amazing creatures are great at spotting potential predators from far away. But if danger gets too close for comfort, the ostrich will often lie low to hide, stretching its neck along the ground. Its coloured feathers help it to blend in with the sandy soil where it lives. Have you ever heard that ostriches bury their head in the sand to hide? Well, as funny as that sounds, it’s not true! But from far away, depending what position the ostrich takes, it can sure look that way, hence how the myth began. BBC

Ostriches are mainly vegetarian, eating roots, leaves, flowers and seeds. But they will also eat insects, lizards and other small creatures, too. They generally live in the vicinity of grazing animals such as wildebeest, antelopes and zebras, and together they form a great partnership – the grazers stir up insects and rodents for the ostriches to eat, and the ostriches help alert the grazers to dangers such as approaching lions.

Ostriches live in groups, called herds, generally made up of around 12 individuals. Males compete with one another for control of several females (or hens), and the winner becomes the leader of the herd. Each group also has a dominant hen, she will only mate with the alpha male, but he may mate with other females in the herd as well.

During breeding season, the alpha male makes a nest in the ground and attempts to attract females by, believe it or not, dancing! His impressive moves include dropping to the ground, shaking his wings and tail, and swaying his head and neck from side to side. After mating, the hens lay their eggs in the nest. But these are no ordinary eggs, gang – they’re the largest eggs in the world, averaging around 15cm long and weighing up to a mega 1.5kg!

The main female may lay up to 11 eggs, which are positioned in the centre of the communal nest where they’re safest, and the other hens lay between two to six eggs. The alpha male and dominant female then look after the nest, taking it in turns to incubate the eggs.

After about 40 days, the new chicks hatch, all feathered and ready to walk! Within days, they leave the nest to follow their parents, who protect them from the hot sun or rain by keeping them huddled under their body or outstretched wings. By the time the young ostriches are 18 months old, they are fully grown and have become record-breaking birds, just like their parents. Impressive, eh?

What did you make of our ostrich facts? Leave a comment below and let us know!