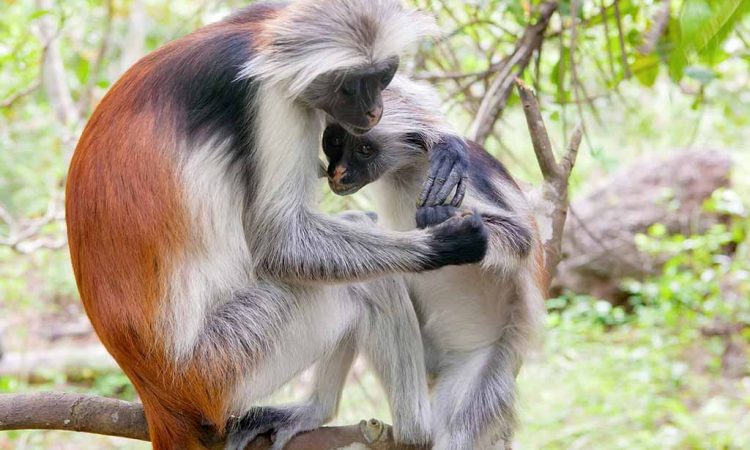 As well as the chimpanzee and gorilla, the black-and-white colobus, red-tailed monkey, grey-cheeked mangabey, Holst’s and blue monkeys, and olive baboons can be seen during game drives, launch trips, or nature walks, along with smaller nocturnal species such as the bushbaby and potto.

Golden monkeys mostly live in highland bamboo forests due to their diet their restricted to this habitat they mostly feed on fruits, leaves, bamboo trees, flowers, shrubs, bamboo shoot and many more. Golden monkeys are easily found while trekking as they do not build new nests daily like gorillas golden monkeys often stay in one place for a while.

In Uganda Golden monkey trekking can be found in Mgahinga Gorilla national park with about 40000 golden monkeys habituated, golden monkeys live in social groups of 30 called troops dominated by an adult male, golden monkeys derive their name because of their body color. One of their unique feature is that they are very playful and move very fast.

Unlike gorilla trekking which is limited to a maximum number of eight people, golden monkey trekking has no limitations many people on a given trekking day can go do this activity, the golden monkey permit mostly includes the park fees, spending one hour with the habituated group and ranger guide services.

Golden monkey trekking starts with a briefing at the park headquarters at 7:00 am East African time and the trekking starts at 8:00am. The trekking time normally takes about an hour and golden monkeys are renowned for being photogenic in that they are not shy and you can have pictures with them close.

Tourists can book accommodation near or within Mgahinga national park some of the lodges where to sleep include; Travelers rest hotel, chameleon hill lodge, Kisoro tourists hotel, Amajabere iwachu camp and Mount Gahinga safari lodge.

Golden monkeys are endemic to the Albertine rift in the virunga massif and it’s the only place in the world where you can have chances of seeing this beautiful creatures please come visit Uganda for this thrilling experience and more. There’s also a chance for those who would love to stay with monkeys for long they can opt for golden monkey habituation and stay with monkeys for four hours along side researchers.

It’s advisable that visitors going for golden monkey habituation must carry a day pack, wear long sleeved shirts, hiking boots, water, a hat and many other things you might need. The golden monkey trekking is a lot easier than gorilla trekking as the monkeys live on the mountain slope unlike gorillas.