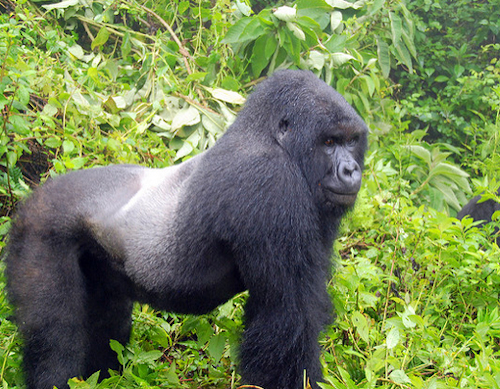 Uganda has more than half of the world’s mountain gorilla population found on the Virunga Mountain slopes in Mgahinga National Park and Bwindi Impenetrable National Park. There are two species of gorilla recorded only in Africa: the Eastern and Western Gorilla (Gorilla gorilla). BBC

Mountain gorillas (Gorilla beringei beringei) are a subspecies of the Eastern Gorilla, which also includes the Grauer’s gorilla in the Democratic Republic of Congo (DRC).  Made famous by the film and book “Gorillas in the Mist” mountain gorillas are one of the success stories in conservation having increased from 360 individuals in the early 2000s to 800today. Mountain gorillas live in family groups headed by one or more Silverback males, with several females and young. They mainly eat herbaceous vegetation such as nettles and thistles but will sample bamboo in excited groups when it is producing new shoots.  Babies are born when a female reaches 9-12years and will be weaned at 3-4 years. Males are often pushed out of the group when they reach adult hood and develop the silver back at around 12 years,becoming lone males until they can take over a group of females when a group male is too old to defend it or dies.

Uganda conserves two populations, those found in Bwindi Impenetrable National Park and those found in the Virunga Volcanoes. The latter site straddles the borders of Uganda, Rwanda and the DRC and the Mgahinga Gorilla National Park forms the Ugandan portion of these volcanoes. WCS’s George Shaller studied mountain gorillas for the first time in 1959-60 and WCS continued to support research and conservation activities in the Virunga Volcanoes in the DRC and Rwanda into the 1970s and 1980s.  We began supporting surveys of Bwindi Impenetrable Forest in the mid 1980s and discovered that the site was important not only for gorillas but for many endemic and threatened species. The information led to the designation of Bwindi as a National Park in 1991.

Initial surveys of this species estimated about 450 individuals in the Virunga Volcanoes and 130 in Bwindi in 1960. Habitat loss and hunting caused numbers in the Virunga Volcanoes to plummet to 230 in the mid-1970s ,but with conservation support the mountain gorilla population has gradually increased to 480. Similarly, numbers are now estimated at 320 in Bwindi Impenetrable National Park. This makes a total of some 800 individuals in the world today. .

Mountain gorillas are very well protected in Uganda because of their importance for tourism. Mountain gorilla tourism generates more foreign currency than any other activity in Uganda today. Proceeds from gorilla tourism support the conservation of most of the other National Parks and Reserves in Uganda. Occasionally poachers attempt to capture infant gorillas for the wild animal pet trade, and in so doing often kill many adult gorillas in the infant’s group. Gorillas can fall foul of snares set for antelopes, often losing a hand or a foot and dying of septicemia in the process. Disease is also a potential threat. Gorillas are very susceptible to human illnesses and in captivity they receive the same vaccinations as children. This is not an option for wild mountain gorillas and tour operators need to take precautions to ensure that tourists do not transmit any potentially harmful diseases to them.