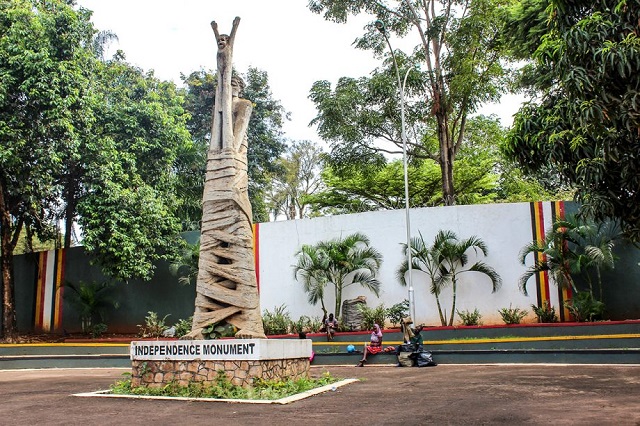 The Independence Monument is printed at the back of Uganda’s currency notes.

From that time, Uganda and her resources belonged to the British government. Indigenous people had little or no say about the future of their country.

The 1962 Uganda’s independence was welcomed with happiness and joy. Songs of jubilation and celebration were heard in all corners of the country. Gregory Maloba put up an independence monument to signify the independent Uganda.

It was instituted in the few months prior to the October 9th 1962 event. A huge towering concrete sculpture is symbolic in nature and it has several meanings attached to it.

It shows a woman standing on ground while lifting a baby in air, the woman with a roping around her body looks at a little boy in her hand who raises his hands in triumphant jubilation. The woman is mirroring the firm foundation that Uganda as country stands. The loosen body of the woman shows freedom from the bondage colonialism.

According to Marion I. Arnold, in the book, Art in Eastern Africa, the female figure with the child, growing from earth like a giant forest tree signify the motherland. The mother, standing astride, has both legs firmly attached to the ground strengthening her. Meaning Uganda is firm through the ages and not given to be moved now or in the future. The presence of voids within the binding may suggest that the bond between the colonial masters and their colonies has been loosened. But more specifically there, is an allusion to the stress of independence euphoria under which the sculpture was made. As her bonds fall away, Mother Uganda holds aloft a joyful newborn child of independence.

Located along Speke road near the wall fence of Sheraton Hotel

Sir Edward Frederick William David Walugembe Mutebi Luwangula Muteesa II (19 November 1924 – 21 November 1969), was the Kabaka (King) of Kngdom of Buganda a from 22 November 1939 until his death. He was the thirty-fifth Kabaka of Buganda and the first President of Uganda.

This monument was put up to commemorate Sir Edward Mutesa II as the first president of the independent Uganda and the 35th King of the Kingdom of Buganda for his work towards the struggle for independence in Uganda. The Kabaka of Buganda – Ronald Muwenda Mutebi unveiled this Monument in 2007.

World War Memorial Monument commemorates those lost in World War II, Printed on the back of 5,000 Uganda shillings note

It is the oldest monument in Kampala built by the British colonial government in 1945 in memory of Ugandans who died supporting British soldiers during the 1st and 2nd world wars.

Located on Kampala road, next to the Central Police Station

This is positioned in the famous Centenary Park along Jinja road in close proximity to Hotel Africana. It commemorates the centenary of the Kampala City Council – the governing body of Kampala City. This feature was designed by a Makerere University Artist, Sylvia Katende and it stretches up to 6 feet.

The Statue of Leadership

This is situated in front of the Amber House on Kampala road commemorating the introduction of electricity in Kampala. The sculpture features Sir Apollo Kaggwa the Prime Minister of Buganda Kingdom from 1890 – 1926. He is celebrated for having advocated for the extension of electricity and purified water to the Kingdom of Buganda amidst critics from the local Baganda who thought he was wasting time on unnecessary things instead of requesting for gold and guns. The 7 feet monument was facilitated by Electricity body with a hand from National Water and was uncovered in 2002 by the then Minister of Energy Hon. Saida Bbumba. BBC

Various Institutions of learning including Universities and colleges contain monuments depicting the role of education.
Kyambogo University had a monument with three kids struggling to touch a book and it was put up in commemoration of 100 years of the education sector in Uganda. The monument was unveiled by Kintu Musoke in 1996.
Makerere University has the Monument titled Hatching a new generation in front of college of Natural Sciences. It depicts the new dawn in the world of academics in Uganda with rising of many institutions under the example of the fully established Makerere University.

This is located amidst Kampala Serena Hotel and the Parliamentary gardens and was put up in commemoration of the Common Wealth Heads of Government Meeting (CHOGM) 2007. It was uncovered by the Queen of England and it is so far the most expensive monument in Uganda with a total cost of 150 million Uganda Shillings. The works of the stride monument were conducted by a team of eleven professional sculptors under the command of Prof. George Kyeyune. The wife husband and son aluminum assemblage moving forward depicts that common wealth countries are developing together as a family.