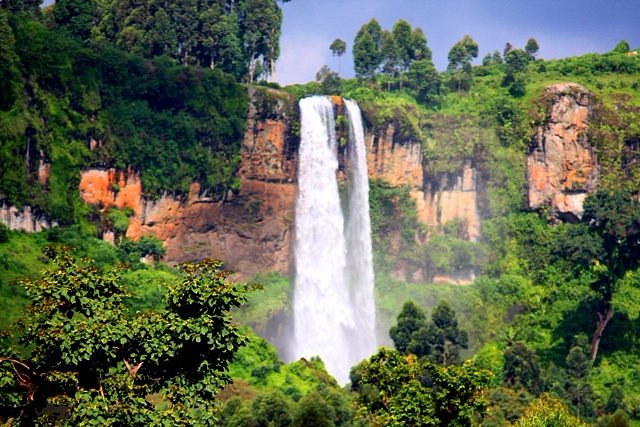 Sipi Falls consists of three waterfalls, found in the village of Sipi, in the Kapchorwa district of eastern Uganda, just over 4 hours drive from Kampala. BBC

The climate is cooler than most of the country, and though the weather tends to be pleasant all year round, the best time to visit is during the dry seasons from June to August and December to March.

The glorious falls were named after the Sipi River, which in turn was named after a locally grown plant called ‘Sep’. The plant resembles a wild banana and is used for medicinal purposes as it’s believed to treat measles and fevers.

Sipi Falls lies at an altitude of 1,775 metres. The hikes can be difficult and muddy, but they’re deserving of your energy.

When you stop to look at the beauty of the falls, you’ll forget about your aching feet and mud-stained trousers. To hike all three falls, it’ll take you roughly 3 hours.

For the majority of this hike, you follow a river, making it easy to stay on track. It’ll take you through farmlands, and local communities.

The second-highest of the waterfalls comes first. It plunges 85 metres before concluding in a spectacular splash. The next fall is the smallest, at 65 metres. When it’s dry, you should be able to stand under it. If it’s been raining, you can stand in the cave behind the falls, and watch as the water crashes in front of you.

The last fall is the tallest at 100 metres. Make sure to pack a swimming costume, as the plunge at the bottom is large enough to swim in.

As well as Sipi Falls, there are numerous trails you can follow leading you to Mount Elgon.

Sipi Falls is known for the production of organic arabica coffee. Since 1999, the Sabiny and Bagishu people have farmed coffee on the slopes of Mount Elgon.

If you’re interested in learning about how the coffee is made, we can organise a tour where you’ll join a household and experience everything from farming to roasting.

What else can I do at Sipi Falls?

Sipi Falls is captivating, and there’s plenty to get up to after you finish your hike.

For the thrill-seekers in the group, you can do rock climbing or abseiling in the region.

In the surrounding caves, you’ll find the Nyero rock paintings. The paintings are believed to date back to the year 1250 and are considered the most important rock art in Uganda.

For keen birdwatchers, there are over 275 species of birds. Or, if you want to fish, you can catch some mountain trout with the help of a guide.

A great excursion is to wander down to the local village and meet the Sabiny people to learn more about their way of life, dress codes, and traditional dances.