The Equator is an imaginary line on the surface of the earth, dividing the Earth into the Northern and Southern hemispheres.

In Uganda it crosses on land and on Lake Victoria. This gives a country a warmer experience and two seasons of dry and wet weather.

Tourists stop at the Equator not just for photographs, but also for simple demonstrations that prove it is indeed the famous crossing.

What made Uganda’s exhibition stall unique and could have possibly led to the high ranking was a replica of the equator monument displayed next to a mountain gorilla sculpture. Days later, as the Irish community in Uganda celebrated St Patrick’s day, they, for the fourth year running, ─ chose to light the Equator monument green. 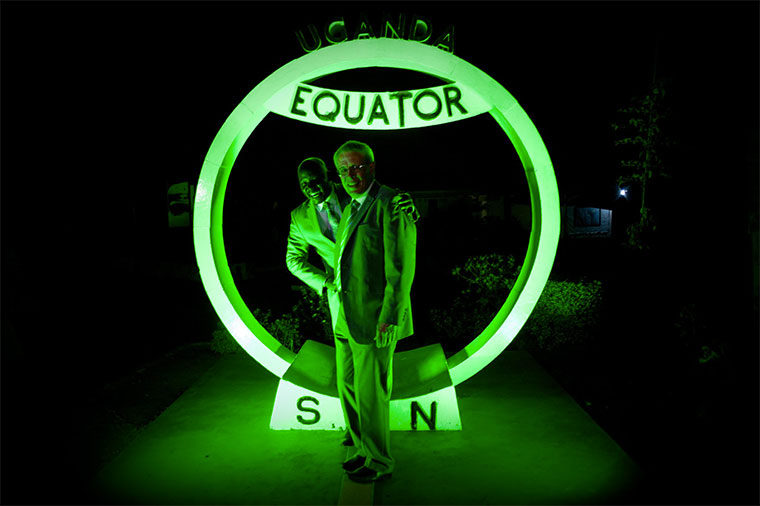 At the function held at Kayabwe where the equator crosses the Kampala-Masaka highway, Frank Kirwan, the chargé d’affaires, embassy of Ireland in Uganda said the Equator monument was one of more than 200 landmarks across the world to go green for St Patrick’s day and images of the ‘greened’ Equator would be broadcast across the world, joining the ranks of other globally famous landmarks such as the Empire State Building in New York, Table Mountain in South Africa, the pyramids in Egypt and the Great Wall of China.

Observers say this publicity could be exploited and the Equator made one of those strong selling points to attract tourists into the country.

“In Uganda since we are near the equator, we have a natural air conditioner all year long. We have summer throughout the year and like Winston Churchill once said, anything can grow anywhere in Uganda,” John Ssempebwa, the deputy chief executive officer of the Uganda Tourism Board (UTB), said.

Julius Agaba, local resident, says that on several occasions, he and friends have stopped at this place to take pictures and continue with their journey, but he does not know the relevance of the Equator.

“I did not study a lot because my parents were poor people; so, all I know is that the Equator is the path of the sun,” Agaba said. He wondered why there is no one at Kayabwe to tell him more about it, a weakness he put on tourism authorities.

This is one of the things state minister for wildlife, Godfrey Ssuubi Kiwanda wants to change. Kiwanda said government is in advanced stages of drafting a plan that will see the development of the place so that people can spend more time there and learn more about Uganda.

“We can have it stretch for about two kilometres having different Ugandan activities and an equator museum whereby in case someone stops say to take pictures, one can spend more hours learning about Uganda and other interesting places the country has to offer,” Kiwanda said.

At the spot, two circular monuments coloured white with inscriptions “Equator” face each other on opposite sides of the road.

Inspire African Safaris will give you the best safaris you need in Uganda,