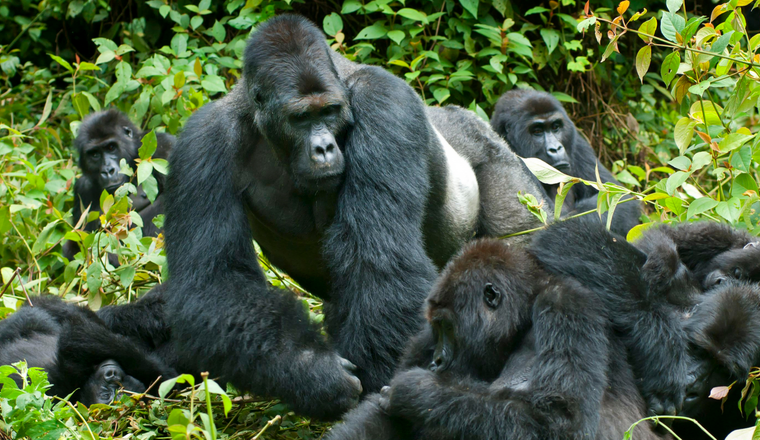 Uganda has more than half of the world’s mountain gorilla population found on the Virunga Mountain slopes in Mgahinga National Park and Bwindi Impenetrable National Park. BBC

There are two species of gorilla recorded only in Africa: the Eastern and Western Gorilla (Gorilla gorilla). Uganda’s mountain gorilla is a subspecies of the Eastern gorilla, found only in the east-central African rainforests. As their name hints, they live only in the mountains at elevations between 8,000 and 13,000 feet.

According to a recent publication (2018), a little more than 1,000 mountain gorillas remaining on Earth. Some of the mountain gorilla population lives in the rainforests of the Virunga mountains in central Africa. The other almost half roam the montane jungle floors of Uganda’s Bwindi Impenetrable Forest.

Three subspecies of gorillas are recognized.

Where do mountain gorillas live?

Mountain gorillas live in east-central Africa in just two isolated groups – one in the Virunga Volcanoes, a cross-border region spanning three forest reserves in Uganda, Rwanda, and the Democratic Republic of Congo. The other lives in a far-flung, isolated montane forest in Uganda,  Bwindi Impenetrable National Park, extending to Sarambwe Nature Reserve in DRC.

Mountain gorillas share 98% with humans, which means that exposure to human illnesses – even a cold – can have potentially detrimental impacts on gorillas. They are so genetically similar to us and haven’t developed the necessary immunity to common human diseases.

Gorilla tourism is mainly why these creatures have the attention to survive extinction in the first place. So conservation teams and governments have stringent procedures to minimize the spread of human diseases to these precious creatures. Some of these measures include gorilla habituation, a controlled number of visitors, keeping at least 10 meters from them, and wearing a facemask, among others.