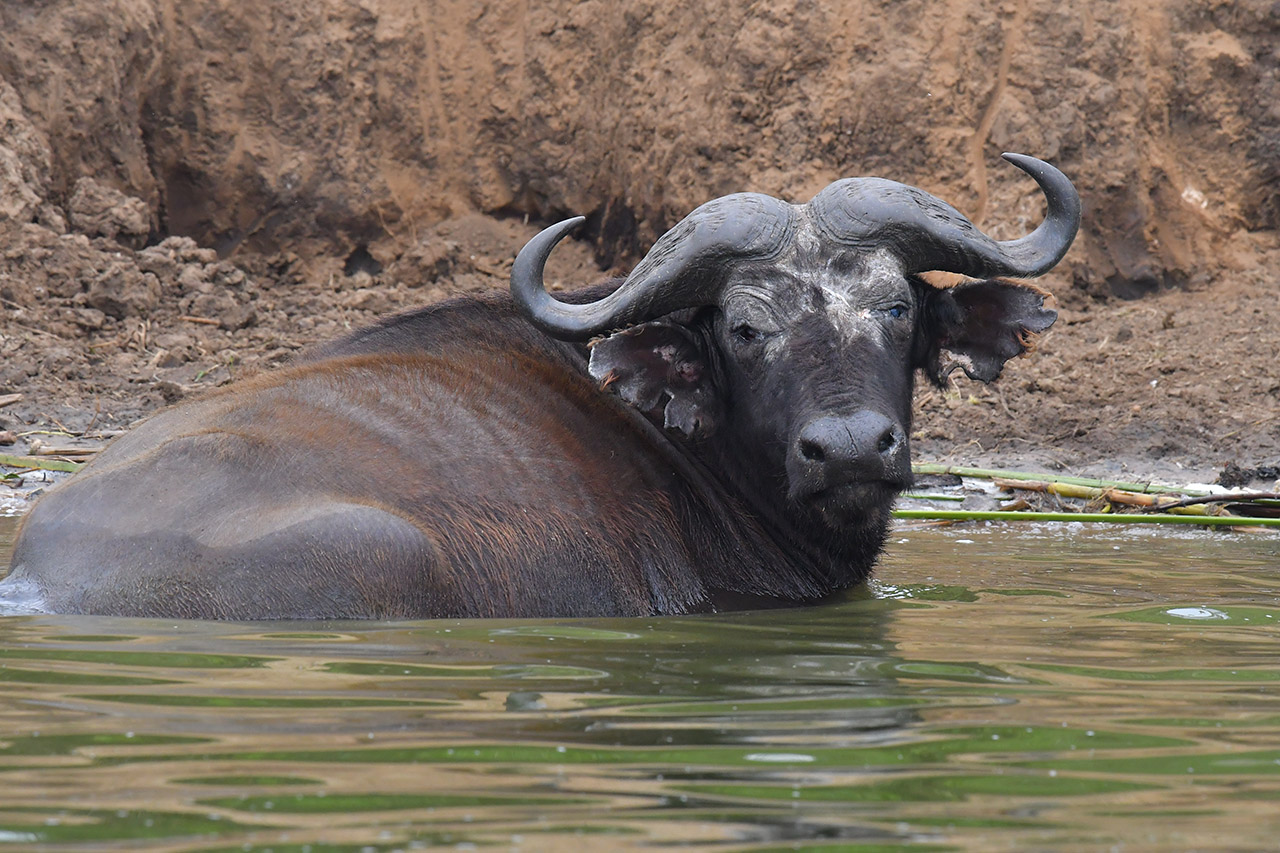 A buffalo is believed to be a cross of an ox and a cow, it is a verge huge African bovine and among the big five animals. An African buffalo is also known as a cape buffalo, it has thick horns that protrude from each side of its head and its one of the best animals you can see on your Safari in Uganda. They are usually dark gray in color or black and lighter undersides of its body but you may not see this because they are usually very dirty from wallowing.

The male buffaloes and females both have the horns except that the males have a horn shield around the forehead and they are usually larger than the females in size. Generally, they usually grow up to 3.4m long, with 1 to 1.7m in height/ above the ground and they can weigh between 250-850kg. Their life span is between 15 to 25 years.

Where to see the Cape Buffaloes on your Uganda Safari

There are two types of buffaloes in Uganda and these include the small forest buffaloes which are very common in Semliki national park and then those huge savannah buffaloes like those found in Murchison falls national park, Kidepo valley. Other places where buffaloes are found include Queen Elizabeth national park, there are plenty of them in the beautiful Kidepo Valley national park where they can even fin you at the verandah of your hotel, among the places.

How they live and reproduction

They normally stay in big number, in a group called a herd for example in Murchison falls national park, one can be able to see a herd of 1000 buffaloes grazing. Herds are in two types, one is composed of related animals, majority are females with their young ones and the other is the bachelor herd. An African buffalo prefers to stay in the open savannah kind of environment; you can find them around the rainforest areas, areas alongside the rivers from where they can find the mud to wallow.

There is often a dominant male with thick horns and the young males keep a distance from the dominant males therefore form their own bachelor herds leaving the females with the main herd. They make two bachelor herds with one composed of the 4-7 years old males and the other has 12 years and above years of age.

They usually mate during the wet season so the young bulls return to the main herd so they can mate with the females but the older bull usually don’t return because they can’t compete with the young bulls which are more powerful and more aggressive. A female buffalo is ready to give birth at five years and when it conceives, it takes a gestation period of 11 and half months, then it will breast feed until the calf can feed on the grass.

The mother is the primary care giver and she will keep her calf safe in the thick vegetation for a number of weeks after birth until it is ready to join the herd but they will are still kept in the centre of the herd for purposes of security. Unlike other bovids, the mother buffalo maintain the sweet relationship with its little one much longer and it will end only if the mother gives birth to another calf but will still keep it close though not like before. A male calf will leave the herd to join the bachelor herd when it turns 4 years.

What they feed on

Buffaloes are herbivores therefore they feed mainly on grass like many like the cows. Despite the fact that it doesn’t feed on humans, it is still considered as a very dangerous animal that is why it is called the widow maker or the Black Death. Buffaloes claim lives of about 200 people every year, a number said to be higher than any killed by any other animal although the crocodiles and hippos are said to as dangerous as the buffaloes to human.

Their main predators are the carnivorous animals like the lions, hyenas. Humans too hunt them especially once they prove to be a big threat to people of a particular village and their crops. Enjoy watching these African buffaloes during a wildlife safari in Uganda