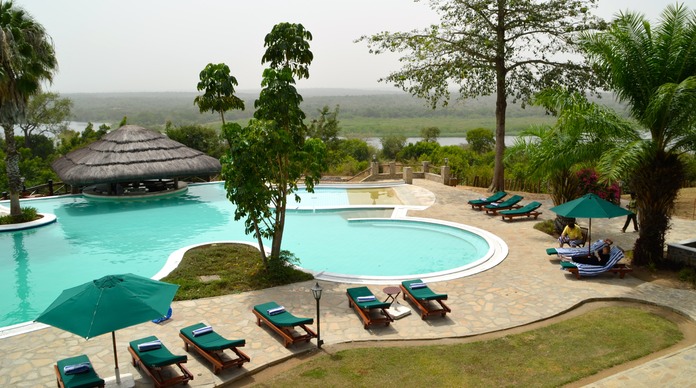 Nile River from source to mouth

With an estimated length of almost 6.700 km the Nile is the longest river in the world.

The White Nile rises in Lake Victoria in Uganda. Untill today the discussion about the real source is still going on. Since 2006 the British discoverer Neil McGrigor claims having found the most distant source in Rwanda, at the beginning of the Kagera River with its mouth in the western part of Lake Victoria.

The Nile leaves this largest lake of Africa at Ripon Falls near Jinja in Uganda. For 500 kilometres the so called Victoria Nile flows in northern direction. BBC

After the passing of the famous Murchison Falls the river flows into Lake Albert. From here the river is known as the Albert Nile and is the last part of the river on Ugandan territory. Via South Sudan the White Nile enters Sudan.

Near the capital Khartoum the White Nile meets the Blue Nile. This tributarybegins at Lake Tana in Ethiopia and flows into Sudan from the southeast.

The northern section of the river flows almost entirely through desert into Egypt. This country has depended on the river since ancient times. Most of the population and cities of Egypt are situated along the Nile and nearly all the cultural and historical sites of Ancient Egypt are found along the banks of the river. Through a large delta the Nile ends into the Mediterranean Sea. The mighty waters of the Nile flow at an average volume of 300 million cubic meters per day passing in the course of a 3 month journey.

Part 1: the Nile in Uganda

The team of Travelling along Rivers is flying from Amsterdam to Entebbe, the airport of the Ugandan capital Kampala. About 80 km from here the first goal is Jinja, a town along Lake Victoria near the source of the Nile. Not far away from here Holland Park, lush situated in a lovely and hilly landscape is run by a Dutch couple. A perfect place along the Nile to relax and recover from the tiring flight and recharge the battery for further travelling in Uganda.

Holland Park is also an ideal base for visiting Jinja and other points of interest along the river. We got a special permission to visit the Breweries, where the famous Nile Beer is produced with water tapped from the river.

The team follows the course of the Victoria Nile in northern direction with the help of Aerolink, a domestic

airline offering flights into Uganda’s national parks. Our goal is the Pakuba Airstrip in Murchison Falls National Park. Sliced in half by the Victoria Nile the park is also the location of the spectacular Murchison Falls. Here the river is facing a narrow passage of 6 meters wide and presents an impressive demonstration of power while the swirling water overcomes a height difference of almost 43 meters.

In Murchison Falls Park our team awaits an intensive program. Based in the luxurious lodge Paraa Safari Lodge, we are planning a wild life safari in the savannah landscape, a visit to the Murchison Falls and two boat safari’s on the Albert Nile. The last sailing trip will bring us upstream to the Delta near the border of South Sudan, the end of the course of the Nile on Ugandan territory.