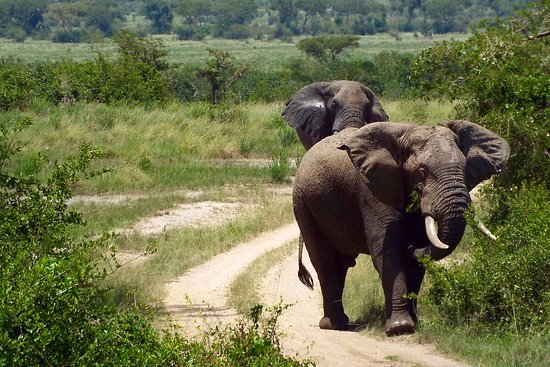 African savanna elephants are the largest species of elephant and the biggest terrestrial animal on Earth. They are easily distinguished by their very large ears—which allow them to radiate excess heat—and front legs which are noticeably longer than the hind legs.

African savanna elephants are found in 23 countries and live in a variety of habitats, from open and wooded savannas to even some deserts and forests. The largest populations are in Southern and Eastern African countries, including Botswana, Zimbabwe, Tanzania, Kenya, Namibia, Zambia, and South Africa. BBC

As a result of their visibility within the open areas where they live, African savanna elephants are well studied and populations are easily estimated. Each family unit usually consists of around 10 females and their calves, and the bulls associate with these herds only during mating. Several family units often join together to form a “clan” consisting of up to several hundred members led by a female matriarch. Due to their habitat, savanna elephants are often found grazing on grasses, but they also browse on a wide variety of plants and fruits. This selection varies depending on the time of year; during the rainy season the elephant will feed more on grass than during the dry season.