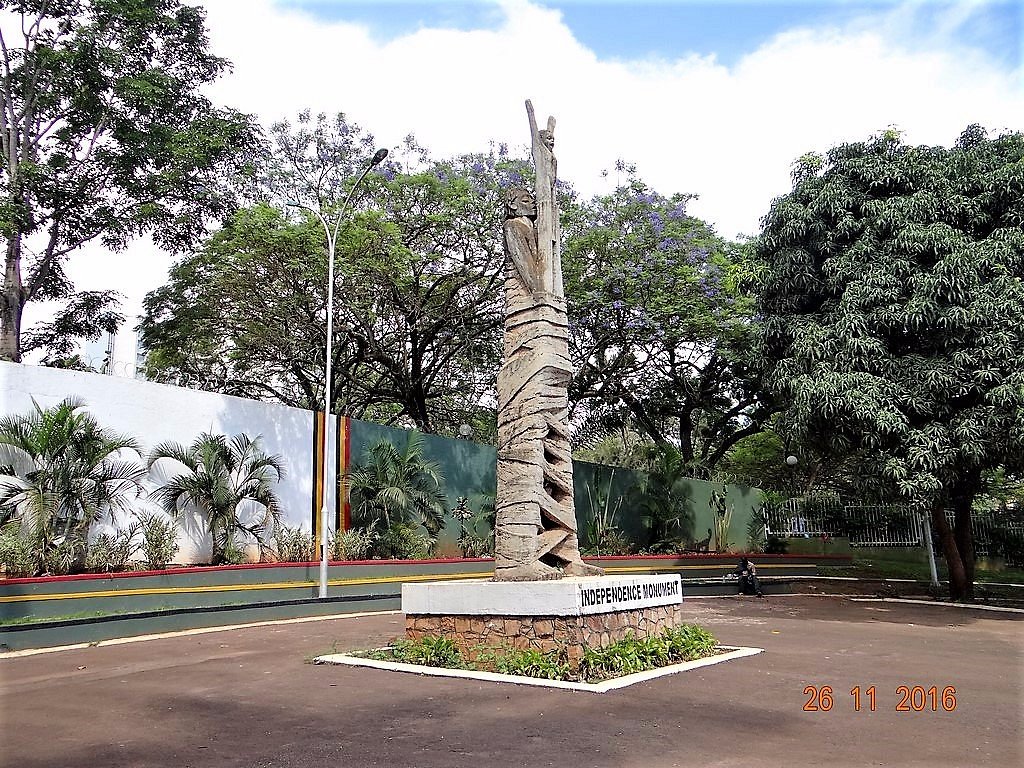 A huge towering concrete sculpture stands behind the wall fence to the Sheraton Hotel, overlooking Speke Road and Nile Avenue. It stares down at the Grand Imperial Hotel to the right and Standard Chattered Bank to the left.

A huge towering concrete sculpture stands behind the wall fence to the Sheraton Hotel, overlooking Speke Road and Nile Avenue. It stares down at the Grand Imperial Hotel to the right and Standard Chattered Bank to the left.

And here, on a concrete pedestal in front of a shrub of overgrown grass, the independence monument watches over Kampala and its people. It is an imposing work of art that shows a woman standing firmly on the ground with her legs slightly parted while hoisting a baby in the air.

The woman with a wrapping all over her body pensively looks as the little boy in her hands raises his hand in triumph. The child seemingly beckons the sky in triumphant jubilation while its mother seems to ponder the future. BBC

This is the story of Ugandaâ€™s independence told through art. But who cares?

For the last 45 years, the independence monument has imposingly stood in this rather isolated part of town and yet many people still wonder the significance of its presence in this place.

But with much of our independence history holed up in the archives, it probably is one of the most outstanding relics of Ugandaâ€™s freedom from the bondage of colonialism. This monument was made from cement, sand, iron bars and wire mesh. It is the work of Gregory Maloba, a Luhya sculptor from Kenya who studied and taught art at Makerere University from 1939- 1965. â€œHe executed this work in the months preceding October 9, 1962- the day of Ugandaâ€™s independence,â€ says Dr. George Kyeyune, the dean, Makerere University school of Industrial and Fine Arts.

Kyeyune says that Maloba was commissioned to execute this work following his long experience as both a student and teacher of sculpture in the country and his well-documented track record in art at that time. â€œHe was one of the better-known artists then. Some of his works then include Ham Mukasaâ€™s bust (now preserved in the Uganda Museum). This gave him an edge over the others.â€

â€œThis project also came at a time when Makerere had gained stature as the leading art school in East Africa. Being one of few lecturers of sculpture at Makerere, he was perhaps the best-qualified person to take on this project,â€ he says.
He was assisted by John Kisaka, one of his graduate students, now a retired teacher.

Kyeyune says that Maloba does not say how much he was paid for the work.

He is also non committal about the actual commissioning of the work. â€œI doubt if it was the outgoing protectorate government that assigned him to execute it,â€ he says.

Mayanja Nkangi, a member of the first independence cabinet says: â€œThis was one of the ideas of new independence government.â€ He says.

Sunada K. Sanyal, an American scholar who studied Malobaâ€™s work and history suggests that this monument was influenced by this sculptorâ€™s strong Christian background and the spiritual convictions of Margaret Trowel, his mentor.

â€œThe Christian image of the Virgin and child is a possible source of inspiration for the independence monument despite its secular content and context,â€ he says.
Having seen the sketch, Kyeyune says the monument was not completed.

It was supposed to have two human figures at each side, each playing a trumpet, perhaps as a sign of jubilation
Nevertheless, this monument turned out to be of much artistic and symbolic significance to Uganda.

The female of the independence monument grows like a tree,â€ said Cecil Todd, one time head of Makerere University School of industrial and fine art.

Indeed, it is the tree of life that Maloba presents from the enormous triangle of the motherâ€™s planted feet emulating a powerful trunk to the universe form of the raised arms of the child signifying sprouting branches as its continuous flow of life across generations, says Sanyal.
He adds: â€œThis image joyfully celebrates life and self determination. It displays the irresistible forces of life and freedom.â€

For all its historical importance, the independence monument is still an abstract concept in the minds of many Ugandans: Dr. Kyeyune sums it up well: It is an accomplished piece of work technically and aesthetically, but one that has not yet found a place in peopleâ€™s consciousness.