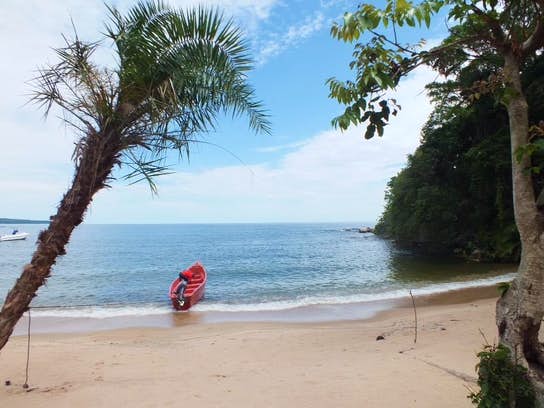 The sapphire waves gently wash upon the sands as white as marble. A distant symphony of tropical birdsongs rouses you from contemplation. As you gaze into the amber sunset, you wonder how you can possibly be standing hundreds of miles from Africa’s coastline.

Africa’s largest lake is nestled between Kenya, Uganda, and Tanzania. Uganda is home to 45% of Lake Victoria’s 68,800 km² surface area and its waters are integral to the prosperity of millions of East Africans.

Named after Queen Victoria by the explorer John Hanning Speke, the lake had been a part of local legend long before Speke’s discovery of it in 1858. Speke’s claim that Lake Victoria is the source of the Nile caused uproar in the scientific community and led to fierce debate.

Lake Victoria’s wildlife, archipelagos, and sheer vastness make it an integral part of any Ugandan adventure.

Lake Victoria supports a plethora of wildlife. The region of Lake Victoria is home to many mammal species, including the hippopotamus, the marsh mongoose, and the giant otter shrew.

It also contains reptiles such as the Nile crocodile and the African helmeted turtle, and many crustaceans, including 4 different species of freshwater crab.

Lake Victoria contains over 200 species of fish and the haplochromine cichlid is the main endemic group. However, many species have become extinct in the last 50 years and scientists estimate that Lake Victoria’s indigenous fish species have decreased by 80%

Lake Victoria is also home to many invasive species, including the notorious Nile perch. In 1954, the colonial government introduced the predatory Nile perch upstream of Murchison Falls to improve Lake Victoria’s fisheries.

Over the course of several decades, the Nile perch has disrupted the natural balance of Lake Victoria’s ecosystem.

A rapid decrease in the number of algae-eating fish allowed algae to grow at a rapid rate. In turn, more detritus fell to the deeper sections of the lake before being decomposed, reducing oxygen levels in the deeper water, and forcing fish into shallower sections

The future of Lake Victoria is threatened by water pollution, overfishing, and water hyacinth invasion.

Unsustainable activities within the catchment also pose a significant threat. Scientists estimate that over 70% of the forest cover in the catchment has already been lost

Things to do at Lake Victoria

It is only safe to swim in designated areas of Lake Victoria, but some locals and visitors choose to swim outside of these areas at their own risk. Local officials estimate that around 5,000 people die on Lake Victoria each year, and drowning is tragically a common cause of death. BBC

There is also a risk of contracting bilharzia (schistosomiasis), a tropical disease which is caused by parasitic flatworms.

Located around 27 kilometres south-east of Entebbe, Ngamba Island is one of Lake Victoria’s most popular islands. Ngamba Island Chimpanzee Sanctuary cares for 50 orphaned chimpanzees which have been rescued across East Africa.

The sanctuary is run by The Chimpanzee Trust, an NGO which aims to sustainably protect chimpanzees and offer captive care for chimps which cannot survive in the wild.

The Ssese Islands are a secret paradise of white sandy beaches and sapphire waters in the north-west of Lake Victoria. This unique archipelago of 84 islands is unmissable for adventurers who want to unwind in a remote utopia.

Bugala Island is the most developed of the Ssese Islands, and it is easily accessible from Entebbe via ferry. You can enjoy a range of activities at Bugala, from quad biking, to fishing and birding.

Banda Island is more remote, and the island has a beautiful simplicity. Escape other travellers and savour meditative walks along the beach, immersing yourself in your idyllic surroundings.