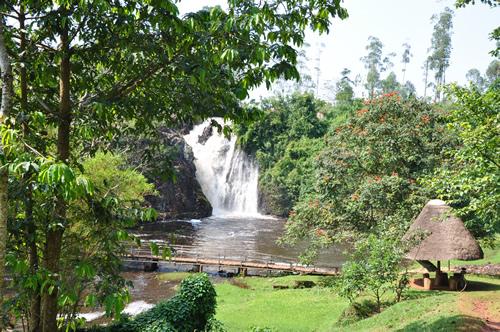 Ssezibwa Falls is located 32 kilometers away from Kampala city along the main road between Kampala and Jinja in the District of Mukono. The Ssezibwa falls are a result of water squeezing through narrow opening of rocks and dropping at great speed (17 meters) into a large pool that is about 14 meters deep. The area around the falls are one of best places to go for relaxation after a long wildlife safari in Uganda  or before visiting the source of the Nile river for activities like Whitewater rafting or bungee jumping. The name Ssezibwa is a local idiom referring to “something endless”. The Sezibwa falls are also considered an important cultural and spiritual site for the Baganda people. They also one of the top things to see in Uganda. The site is under the administration of the Buganda culture and tourism department.

The Sezibwa falls are characterized by several rocks with sharp edges and a large pool below. From the falls, the river Ssezibwa flows all the way to Lake Kyoga. The area around the falls is home to small primates like Vervet and red-tailed monkeys. Snakes like the African cobra, green mambas and horned adder also call the place home. Other animals include otters, tadpoles, mongooses and wild cats.

The Ssezibwa falls are an important part of Buganda’s history, culture and beliefs. This cultural importance adds to the mystery and attractiveness of the falls. The Baganda believe in the supernatural powers of the river Ssezibwa. A Buganda Legend has it that a woman (Nakangu Tebatuusa) had an issue with her husband (Nsubuga Sebwaata) and left her marital home to her parents. Her dad told her to go back to her husband and sort out their marital issues. She was escorted by her mother who left her close to her home. As she approached her marital home, she got tired and as she rested, gave birth to birth to twins in form of water. He husband found her after being led by a man who had seen her go to the bush. They saw a pool of water flowing which became the two rivers named Bwanda and Sezibwa.

At birth Bwanda flowed towards the East to Nyenga while Sezibwa flowed towards the west meeting many obstacles. He was helped by a spirit (Nalongo Nnkubo) through the obstacles. This Spirits settled in the area around the waterfalls and shrines where built to worship them. Apart from Nnalongo Kkubo other gods include Walumbe (god of death and life), Musoke (Rains), Ddungu (hunting), Kibuuka (war), Musisi (earthquakes) and Mukasa (fertility, wealth and good health). Because of this legend, twins are highly valued in Buganda. Their birth is looked upon as a special blessing and rituals were performed to appease the gods. The parents are given special names like Salongo (Father) or Nalongo (Mother).  It was tradition for everyone passing close to the waterfalls to throw stones into the water for blessings.

The Kings (Kabakas) of Buganda used to come to this place to seek blessings and good health. Kabaka Mwanga planted a wild olive tree known as Mwanga tree while on a journey between two of his palaces in 1889. This tree is over 100 years old. He was spell-bound by the natural beauty of the waterfalls and decided to stay in the area for some time with his servants.  While leaving, he planted a tree to honor the gods of the falls. Cultural. Later King Muteesa II also planted a tree as a mark of respect and recognition of the spiritual importance of the waterfalls and river Ssezibwa. King Ronald Mwenda Mutebi II paid a visit the place in 2002 to commission it as one of Buganda’s important tourism sites.

The kings aside, people from all over Uganda still flock to the place to seek blessings from the gods for their health, jobs, children, business and families. The medicine men (traditional healer) invoke the gods or use local herbs to cure diseases, toothache, stomach upsets and skin diseases. Sacrifices to win the favor of the gods may include coffee beans, eggs, local beer, chicken or animals like sheep and goats. The animals and chicken are killed on top of the falls and then dropped down to appease the gods and feed Ssezibwa. Do not be shocked if you find dead animals at the foot of the falls. BBC

It is interesting to note that although these cultural practices thrive here, the Anglican church owns some land close to the waterfalls. Christians come to the area for retreats and meditation. Baptism services are performed in the same waters. You might be interested in an article about the top heritage sites in Uganda. We have an amazing 1 day Jinja city  package that covers Sezibwa falls and all the other interesting activities within Jinja.