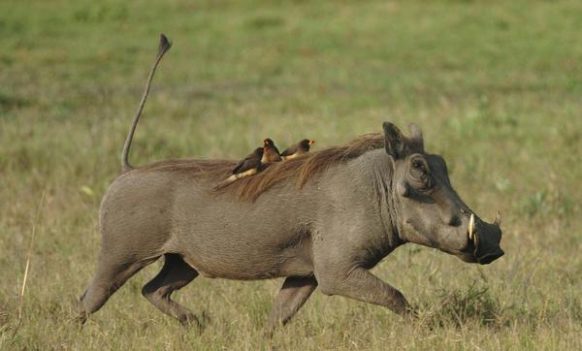 This nature reserve was established in 1952 and it straddles in southwestern Uganda just within Rukungiri district. Kigezi Wildlife Reserve spans up to 265 square kilometers and it is largely composed of vast plains, savannas and forests. Its wildlife species thrive within its distinct vegetation including savanna, woodland and open grassland. The notable wildlife species to find within this spectacular nature reserve include buffaloes, topis, bushbucks, Uganda kobs, waterbucks, giant forest hogs, elephants and not to forget variety of birds. BBC

This wildlife reserve inhabits huge concentration of elephants which roam from the eastern side from Rwindi plains in the Democratic Republic of Congo and the south from Queen Elizabeth National Park especially around the wet/rainy season.

This protected area acts as a barrier among the Queen Elizabeth National Park’s Ishasha area, Maramagambo forest and largely covers the southern parts. Equally, the park, open grassland, the woodland and savanna serve as a buffer to the Ruwenzori Park to the north. Currently, no accommodation options are available yet.

How to get to Kigezi Wildlife Reserve

Kigezi Wildlife Reserve is about 318 kilometers’ drive southwest of Uganda. You can get to this stunning nature reserve through Kampala to Masaka to Mbarara then to Ntungamo and Rukungiri then lastly, you get to the reserve.

This Wildlife Reserve is a sanctuary for herds of Elephants that transverse to the east to the vast Rwindi savannah plains in the Democratic Republic of Congo and the Southern side from Queen Elizabeth National park by the beginning of the rainy season. Other popular wildlife species to expect within this Wildlife Reserve include Lions, Defassa waterbucks, bushbucks, Hippos, Topis, Uganda Kobs, Oribis, bush duikers, warthogs, Giant Forest hogs, Buffaloes and occasionally leopards from Queen Elizabeth National Park among others.

Several bird species call this wildlife Reserve and they include; Red-faced barbets, the Verreaux’s Eagle Owl, Hammerkop, Marabou storks, the Peregrine Falcon, the Grey-crowned cranes and the Saddle-billed stork among others.

The safari activities that are conducted within the Wildlife Reserve include game viewing/game drives, nature walks and birding watching among others.

Kigezi Wildlife reserve is an all year destination. If you are interested to capturing the Elephants that migrate from Rwindi Plains in DRC to South of Queen Elizabeth National park, you have to visit the Wildlife reserve in the rainy season (October to November and March to April). The best season for viewing other wildlife species is the dry season (June to September and December to February).

Where to stay at Kigezi Wildlife Reserve

In addition to this reserve, you may also pay a visit to other remarkable nature reserves while on Uganda safari especially Pian Upe Wildlife Reserve, Bokora Corridor, Matheniko, Toro Semliki, Katonga Wildlife Reserve, Karenga Community Wildlife Management Area and Bugungu and Karuma Wildlife Reserves a mention but a few.

In summary, Kigezi Wildlife Reserve is incredibly that one most amazing and stunning nature reserves you need to consider a must to pay a visit while on Uganda safari. A visit to this wildlife reserve rewards you with astonishing views over its diverse wildlife species including elephants, buffaloes, Uganda kobs, topis and many other antelope species.

One thought on “Kigezi Wildlife Reserve”